Signs of the Times: From Alphonse Gratry to Vatican II

Here is the video from the Australian Cardijn Institute webinar with American philosopher, Madonna Clare Adams, and ACI secretary, Stefan Gigacz, marking the 150th anniversary of the death of Alphonse Gratry:

Signs of the times: From Alphonse Gratry to Vatican II


This year marks the 150th anniversary of the death of French priest, Alphonse Gratry (1805-1872), philosopher and theologian, whose work inspired Cardijn and many other social activists of the late 19th century.

As principal of Stanislas College in Paris, in 1840, he hired the young Frédéric Ozanam, founder of the Society of St Vincent de Paul. During the Revolutions of 1848, he wrote a pioneering manual of social action.

From the 1850s, he began publishing his major works in the fields of philosophy and theology. His theory of induction helped provide the foundation for Cardijn’s see-judge-act method.

During the First Vatican Council in 1870, he led the battle against the very broad definition of papal infallibility that many Council Fathers had sought.

Madonna Clare Adams holds an STM from Yale Divinity School and a doctorate in Philosophy from Catholic University of America in Ancient and History of Philosophy. She directed a NY State Liberty Partnership Program for at-risk high school students, and was Director for the Center for Applied Ethics at Pace University, NY.

She has articles in the Dictionary on Catholic Spirituality, and has written on Plato’s political thought and modern democratic theory; the philosophy of Dr. Maria Montessori in relation to Plato’s education for citizenship, Aristotle’s philosophy of nature, and Marx’s concept of work; and Medieval Philosophers and the Environment.

A student of Dr. Mary L. O’Hara, CSJ, she assisted in the publication of her translation of Gratry’s Philosophy: A Translation of Julián Marías’ La Filosofia del Padre Gratry (Adelaide: ATF Press Publishing, 2020) the first major work on Gratry in English. Retired from Caldwell University and living in Whittier, CA.

Originally from Melbourne, Stefan Gigacz worked for a short time as a personal injuries lawyer. While at university, he became involved in a local parish YCW group. In 1978, he became a fulltime worker for the movement, working in Melbourne, Brisbane and Sydney and later for the International YCW.

Later, he completed master’s degrees in canon law and legal theory. From 1997-2000, he coordinated an international project to document the history of the YCW before taking up a position as a project officer with the French Catholic development agency, CCFD-Terre Solidaire. From 2006-2008, he worked as a pastoral worker in a Melbourne Catholic parish. Since then, he has worked as an editor and journalist for a series of Catholic online publications.

From 2012-2018, he worked on a PhD thesis on the role of Joseph Cardijn at the Second Vatican Council, now published under the title “The Leaven in the Council: Joseph Cardijn and the Jocist Network at Vatican II.” He now resides in Perth, Western Australia, where he devotes his time to the development of the Australian Cardijn Institute. 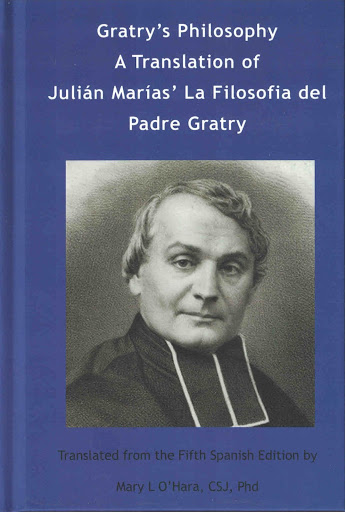 Mary L. O'Hara, C.S.J.
Mary L. O’Hara, C.S.J. (1923–2013), professor emerita of philosophy and lifelong resident of St. Paul, Minnesota, joined the Sisters of St. Joseph (1940) and attended the College of St Catherine (now University) where she later taught as professor and chair of philosophy. A master’s degree from Louvain and doctorate from the Catholic University of America (1956) launched her lifelong work in education and scholarship which took her to Yale Divinity School as a fellow, and to centers of learning on five continents.
During a monastic experience (1973–1979), she attended the Monastic Interreligious Dialogue in Petersham, Massachusetts as delegate and secretary (1977). Later, in India, she researched the life of the Jain nuns (1984–1985).
At the 2006 Colloque Gratry, marking the 200th anniversary of his birth, she recounted her own journey with Gratry. As a young graduate student in the 1950s taking her first course on the history of philosophy, she chose to study the thought of Pêre Gratry, thinking that it would be easier to comprehend than, for example, that of Hegel.  Here she discovered Julián Marías’s work, La Filosofia del Padre Gratry, and finding it “très bon,” she promised herself that “when she was older” she would translate it into English. A happy meeting with M. Marías gave her occasion to ask his permission to translate it, and he gave her a copy for this purpose in Madrid in 1985.
Mary’s books include Persons and Personality: An Introduction to Psychology (1953) with co-author Annette Walters, C.S.J., The Future of Religious Life: The Carondelet Conference (1990), and The Logic of Human Personality: An Onto-Logical Account (1998). Presentations at international symposia, articles and reviews for academic publications in philosophy, law, science, culture, the ethics of life, and spirituality, and writing and lectures for the general public made her contributions widely accessible.
This site compiled by Stefan Gigacz.

Signs of the Times webinar 2022